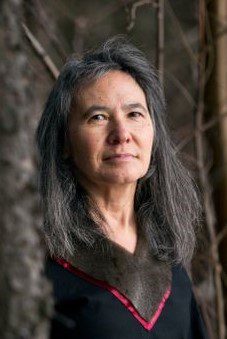 Dalee Sambo Dorough (Inuit-Alaska) is the former International Chair of the Inuit Circumpolar Council, a non-governmental organization that represents Inuit from the Russian Far East, Alaska, Canada, and Greenland. She holds a PhD from the University of British Columbia, Faculty of Law and a Master of Arts in Law and Diplomacy from The Fletcher School at Tufts University. She served as an Assistant Professor of International Relations within the Department of Political Science at the University of Alaska Anchorage from 2008 to 2018; former Chairperson (2014) and Expert Member of the UN Permanent Forum on Indigenous Issues (2010 to 2016); and Co-Chair of the International Law Association (ILA) Committee on Implementation of the Rights of Indigenous Peoples. Dr. Dorough has a long history of direct involvement in the discussion, debate, and negotiation of the UN Declaration on the Rights of Indigenous Peoples (UNDRIP). She actively participated in this work from 1984 up to the adoption of the UNDRIP by the UN General Assembly on September 13, 2007. She also participated in the two-year revision process of International Labor Organization (ILO) Convention No. 107, which resulted in the adoption of C169 Concerning Indigenous and Tribal Peoples in Independent Countries by the ILO in 1989 by the ILO. She specializes in Alaska Native self-determination and has extensive experience in the administration, management, and coordination of statewide, national, and international organizations. Her recent publications include a chapter co-authored with Federico Lenzerini entitled “The World Heritage Convention and the Rights of Indigenous Peoples” in the Oxford Commentaries in International Law (forthcoming 2022) and a commentary entitled “Perspective on Convention 169, its significance to Inuit and some troubling developments,” in The International Journal of Human Rights Volume 24, (2020).

Role: Panel Member
Report: The Future of Arctic and Northern Research in Canada